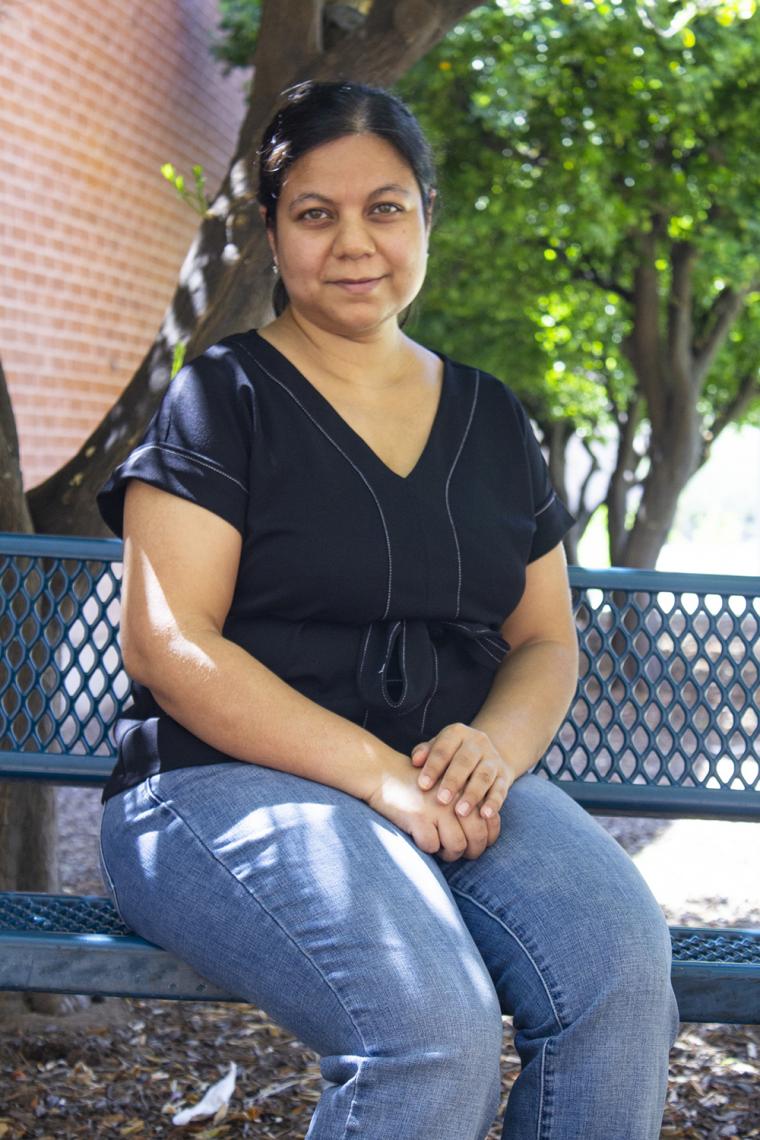 first published: August 2020
Dr. Ananya Mallik finds something metaphysical about studying rocks. “Understanding our own existence on this planet depends a lot on how the planet itself has evolved,” said Mallik, who in August 2020 became the University of Arizona’s The RealReal Inc. Endowed Chair in Gem Science.

The formation of the Earth and other planets often works like the human body, the petrology researcher added. Complex systems work together to create a whole. “The very existence of the planet depends on what’s going on,” she said. “Being a petrologist makes me more connected to where I am.”

Mallik’s background and passion for her work will guide her as she leads the development of a unique academic program on minerals and the most appealing of them, gems. This is on top of continuing her experimental petrology research and teaching as an assistant professor in UArizona’s Geosciences department.

The endowed chair is funded by San Francisco-based The RealReal Inc., a luxury consignment company whose in-house authenticators include gemologists. “We have always invested heavily in gemologists, research and technology,” The RealReal CEO Julie Wainwright said in a 2018 press release. “Collaborating with the University of Arizona on this new degree program will enhance our efforts and the entire industry.”

Mallik, who most recently was an assistant professor at the University of Rhode Island, Kingston, was intrigued by the UArizona position. “I had never heard of a faculty search on gem science before. It seemed like a novel opportunity,” she said. “I am humbled by this opportunity to spearhead such a novel program.”

The gem science program will start in spring 2021 as an undergraduate degree track in the UArizona’s Department of Geosciences. “The goal is to introduce undergrads to different concepts of gem science that they would eventually use in general science, industry or research,” Mallik said.

Eventually, the program will grow to include master’s and doctorate programs that focus on gemological research and skills. Topics would include training students to use chemical fingerprints in a gem to determine where it was formed and likely mined, known as provenance determination. “This is something that the gem industry is really interested in,” Mallik said.

She would like to eventually add courses on responsible sourcing of gems and minerals that take into account environmental and social justice issues, as well as providing training in gem and jewelry design.

The Gemmological Association of Great Britain will allow students in the UArizona program to get their gemology certification through the organization.

Two new courses are coming to the Department of Geosciences for the 2021-22 academic year. In the fall, Eric Fritz and Susan Leib of the Gem and Mineral Museum will lead the charge with GEOS 260 Introduction to Gems and Minerals, where students will gain insight into the basics of gem science and its role in geology and mineral resources.

“This course will lay the foundations to understanding minerals, the science of gems, and will track the journey from a gemstone’s development in nature, and all the bells and whistles until it arrives at the jewelry store. This course will cover where and how gems occur in their natural habitat (or their geology), their composition and crystal structure, properties that dictate how they are cut and polished, non-destructive methods used to identify gemstones, as well as gemstone enhancements and synthetics.”

These topics will be expanded upon in the Spring semester course, GEOS 462/562 Petrology of Gems, taught by Ananya Mallik and Joaquin Ruiz. Topics will cover how to determine the geographic origin of gems and why that is an important issue in the gem industry as well as in earth science research and academia as a whole.

The UArizona will be the first university in the world to have a gem science program once it’s fully developed, as far as College of Science Interim Dean Elliot Cheu knows. “It’s exciting,” Cheu said. “It’s an opportunity to open people’s eyes that the University of Arizona has thought of doing something that no one ever thought of before.”

Tucson is renowned in gem, mineral and jewelry circles. The winter Tucson Gem, Mineral & Fossil Showcase is the world’s largest gathering of the industry. The university’s geoscientists are globally well-known. UArizona is home to the Arizona Geological Survey and a newly reimagined Alfie Norville Gem & Mineral Museum.

Mallik will rely on the Lowell Institute for Mineral Resources for its expertise and class offerings that fit perfectly in a gem science program. The Institute is looking forward to the collaboration. “Partnering with Dr. Ananya Mallik will strengthen and broaden Institute’s connections to a large community of gem professionals, whom we might not otherwise reach,” said institute Co-Director Mark D. Barton. Barton praised Mallik for “her widely recognized research program in earth materials.”

Mallik has been fascinated with planetary processes since she learned about tectonic plates in middle school in her native Kolkata, India. College studies solidified that interest. “Fantastic professors in India showed how to use rocks and minerals as proxies for understanding our planet,” she recalled. “You’re like a detective. That was a fascinating approach.”

A Career in Petrology

Dr. Ananya Mallik earned her doctorate in earth science from Rice University. She continues work into the interactions between the interior and the surface of the Earth and other planetary bodies.

Using high pressure-temperature equipment, she and her research team simulate conditions in the interior of planets to observe the evolution of chemistry and dynamics.