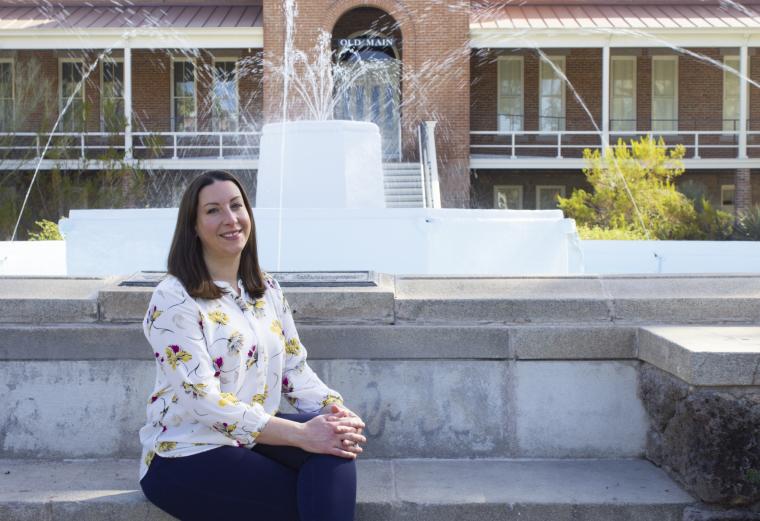 A full-time mom, full-time worker and now student pursuing a masters in hydrology, Gillian Noonan is the superhero we all knew existed, but had never met.

Noonan graduated from the University of Arizona with her bachelors in geological engineering in 2004, and since then a lot has changed. She came to the desert to escape the weather in upstate New York, where she lived. She had only been to Tucson to visit her grandmother during the summer, and if she fell in love with the desert at its worst (an average high of 100 degrees F in July) then she must be a desert dweller at heart. Her friends packed a car with her and drove across the country to move to Tucson, Ariz. and here she studied, met her partner, had a daughter, and got to know the world of mining.

After graduating in ’04, she began working for the Tucson company hydroGeophysics, Inc. There she did geophysical surveys for many mine sites, investigating resources, environmental issues or structural features. “A lot of the surveys that we did on mine sites had to do with hydrogeological issues,” Noonan says.

One thing that through the years has not changed, is her desire to learn. “It's almost overwhelming at times how much potential there is to learn new things,” she says. “It became clear that something widespread that mines have to deal with is how water effects their mining process and how the geological structure at their site controls that as well.” This is where it all came together, her background in geological engineering and her newfound knowledge of hydrology and structural geology urged her to push further into the field.

In February of 2020 Noonan accepted a position at the UArizona’s Geotechnical Center of Excellence (GCE) as their Senior Engineer, Research and Development Focus. The Center was established just a couple of years ago, and as the third member of their team, Noonan has done a lot to help them grow.

When she first started at the Center, they were in the middle of preparing an in-person workshop on radar monitoring systems for April. Those original plans didn’t pan out, but the result of reworking to online opened new doors for the Center and Noonan herself. “In the middle of March, we made the decision to convert it from this in-person workshop to a much more formal online class,” says Dr. Brad Ross, Director of the Center. “Although Gillian was just starting, she took over the management of that and she and Chad Williams [Assistant Director of Center] really put together the online course.”

Despite the challenges they faced in creating the course, the team was successful and are currently running the second iteration of the course as an academic class as well as for professional development. Noonan was and is in charge of the development of the course, that means getting in contact with the presenters, gathering everybody together, creating an outline for the course and making sure everybody is on the same page. “She’s so personable,” says Dr. Ross. “A big part of the reason that the class was successful is the way that Jill reached out and communicated. She's just a really terrific person to work with.”

Since then, the Center has really boomed, aside from the course they are also working on research and the team has grown to include new staff as well as some graduate student helpers. Noonan herself began her master’s degree in hydrology at the UArizona this last Fall, hoping that with her new knowledge she can contribute even more to this growing branch of the university.

Noonan still has time to think about where she will head after graduation, but she hopes to stick around long enough to continue helping the GCE grow. “We’re at the beginning point of building the Center and I really want to see where it goes,” she says. “I enjoy contributing to that effort of building something new that's heading in a great direction.”

School of Mining and Mineral Resources