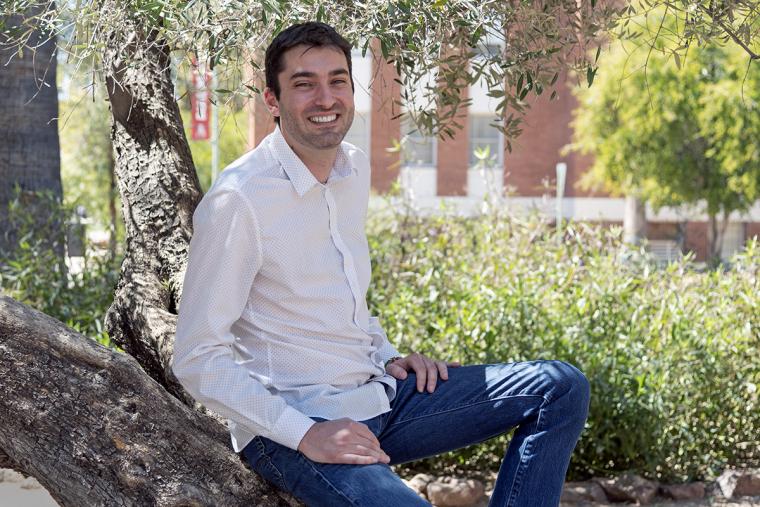 Hervé Rezeau’s wanderlust and earth science interests have sent the French native to countries on five continents, including the United States, where, as a Swiss National Science Foundation postdoctoral fellow, he was a scientist at the Massachusetts Institute of Technology (MIT). Now he’s landed in Tucson as the University of Arizona’s Lundin Family Endowed Chair of Economic Geology and an assistant professor in the Department of Geosciences.

“I always dreamed about a job that allows me to travel the world and discover new cultures,” says the 35-year-old economic geologist.

He calls the UArizona a “renowned” institution in the “heart of a world-class metallogenic belt, where the mining industry is booming.” That sets the stage he needs to further his research on magmatic processes that create natural resources. “I was very excited about the research collaboration opportunities with leading research groups in tectonics and igneous petrology,” Rezeau says. “The economic geology group is internationally known.”

Rezeau’s doctoral work in southern Armenia yielded publication of four first-author papers. He tested the use of zircon trace element geochemistry as a potential method to find porphyry copper systems and found it highly risky. He identified magmatic-hydrothermal cycles where economic deposits are formed at the end of each magmatic series. His reinterpretation of the genetic model that formed the largest porphyry deposit in the Lesser Caucasus could lead to new mineral resource exploration in the region.

At UArizona, he plans to continue studying the magmatic forces that transport metals from the mantle and the geochemical processes leading to economic metal repository at Earth’s near-surface. This could lead to using rock and mineral chemistry to more accurately locate hidden ore deposits for mining potential. He’s eyeing Argentina for research in the Andes.

By fall 2022, Rezeau expects to have master and doctoral students work on two lines of research: investigating magmatic-hydrothermal processes associated with world-class porphyry-epithermal copper-gold deposits and studying the relationships between exhumation processes and the preservation potential of ore deposits.

He additionally would like to find a way to encourage diversity among economic geologists. With his personal ties to Kenya, he’d like to create an educational pipeline with fellowship opportunities between UArizona and earth science institutions in east Africa. “My goal is to produce well-rounded economic geologists who are highly competitive for both academic and mining industry employment,” he says.

Rezeau is looking forward to helping establish the new School of Mining and Mineral Resources. He’d like to develop educational content for an online certificate in economic geology. Another idea is to run a monthly mineral resources “Lundin seminar series” that will attract speakers and attendees from colleges across the university, as well as involve industry players.

“The creation of this school provides opportunities to build a long-term vision on the future of economic geology and mineral resources in the U.S. and worldwide,” says Rezeau.