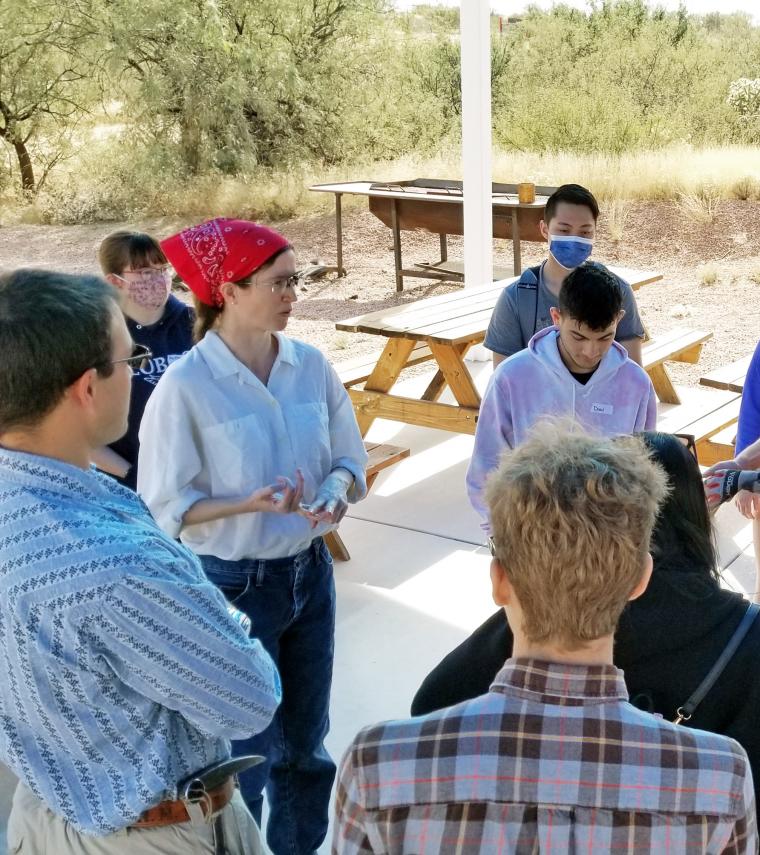 After travelling across the country to study her passion, Isabel Barton leads as a University professor pushing diversity and interdisciplinary work

Since 7th grade, Isabel Barton has been interested in rocks and minerals. Both of her grandfathers were geologists, and there was something about the field of geology that drew her in. The only problem was that Barton lived in northwest Florida where, as she states, “it's hard to find a rock, let alone a field site.” So, when it came time to choose a college, she headed west. Her first stop was in Oklahoma for her bachelor’s in geology. Then she arrived in Tucson, where she received her M.S and PhD in geosciences at the University of Arizona. “I showed up in 2008, planning to get a quick master's degree and get out into the mining industry,” Barton says. Thirteen years later, “I like to say I'm halfway there.”

Barton fell in love with UArizona. The desert landscape was a haven for minerals, and not only did she have a passion for them, but now she could use that to fuel her research. During her M.S., she enjoyed research so much that she extended her studies to a PhD. When the Lowell Institute for Mineral Resources recruited her to start a dedicated geometallurgy program, requested and sponsored by Newmont Mining and Freeport-McMoRan Inc., Barton jumped back into the world of academia and signed up for a postdoctoral M.S. in mining engineering with a focus on metallurgy, which she finished in spring 2017.

Barton could have continued as a research scientist at the Institute, but she was even more ambitious. After another year of research, she became a professor in the Department of Mining and Geological Engineering. “I saw being a faculty member as a way to contribute more to the mission of both the Lowell Institute and the University,” Barton says. Most of her students also focus on geometallurgy, a field she describes as “figuring out and dealing with all the ways that the mineralogy and chemistry of an ore deposit is going to screw you over when you attempt to mine and process it.”

Nearly all of her research has something to do with ores, but there’s a small pocket of another passion of hers: history, specifically the history of mineral resource extraction and use. In spring 2020, pandemic notwithstanding, she pioneered the UA’s first course on the subject, Nonrenewable Resources and Human Civilizations.

“If there's one thing I’ve learned from teaching my class, it’s that framing things historically is a great way to do make content digestible,” she says. “If I tried to explain ferrous metallurgy with a bunch of chemical equations and phase diagrams, I’d get a room full of eyes glazing over. If I talk about ‘how medieval people made Damascus steel,’ I get a room full of ‘wow, that’s so cool.’”

“She was incredibly creative,” says Mary Poulton, who is co-director of the Lowell Institute and hired Barton after her PhD. “Putting together this new Gen-Ed program looking at the use of minerals through history was really clever and important work.”

Barton splits her time between her teaching and her research, and that’s just the way she likes it. “If I just had a particularly rewarding time in class where the students were really engaged, then that feels like the best part of the job,” she says. “But if I had just had a really interesting discovery come up in research, I tend to feel like research is the best part of the job.”

Barton’s work is extremely varied. “One of the biggest difficulties about what I do is the interdisciplinary research,” she says. “Everybody claims to want it, but it's very difficult to find a home for, especially at an early career stage. The Lowell Institute offered me a really unique home for that where I could do geology, metallurgy, all of the above, or something else entirely.”

Poulton feels that Barton’s ability for interdisciplinary work is one of her most important skill. “Her interdisciplinary ability tells students that you don't have to get pigeonholed,” Poulton says. “You have the ability to be a well-rounded individual, and she encourages people to really look beyond the curriculum and develop themselves as such well-rounded individuals.”