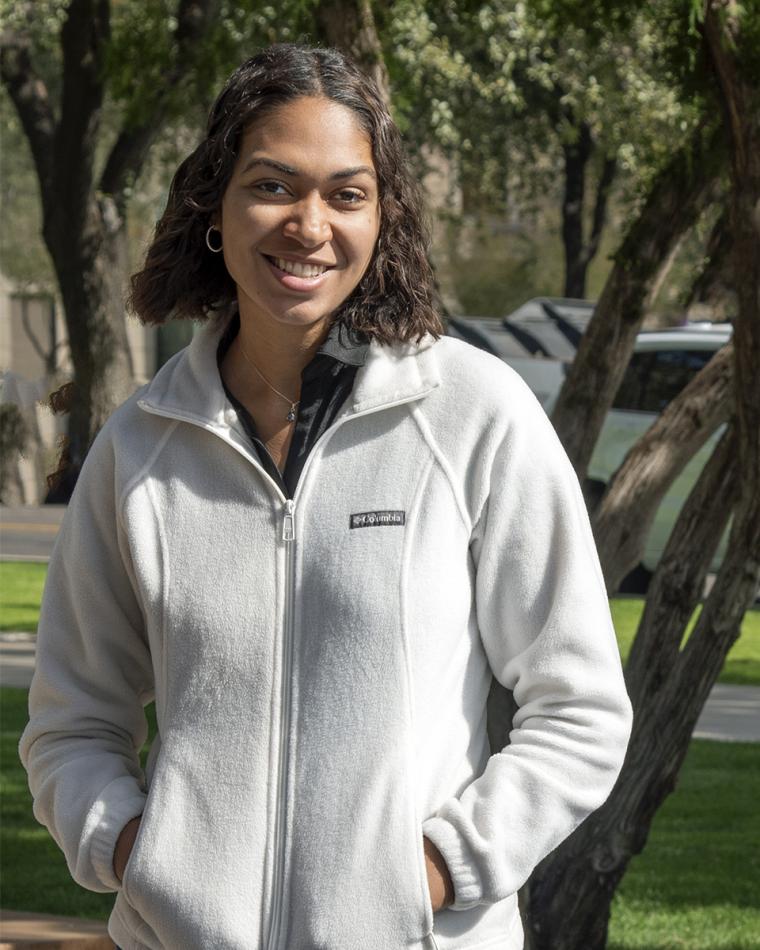 From the sunny shores of Florida to the dry desert of Arizona, Katie Slaughter has come a long way to study the inner workings of the Earth. Luckily, she loves the heat—from the toasty climate and the daunting task of tackling two majors at once.

“I’ve always been really passionate in geology. Ever since I was little, I had a huge rock collection. I’ve always loved being outdoors and going hiking or camping,” Slaughter says. “I always thought I wanted to major in geology.”

However, while she was in the midst of searching for colleges, Slaughter stumbled on the subject of mining engineering and was immediately intrigued. Thanks to a slew of transfer credits from Advanced Placement classes in high school, she only had to take one general education course, leaving plenty of time for exploring her passions. “I figured I would try keeping both and if it works out, that’s great. If not, then that’s okay,” Slaughter says.

It’s no wonder that Slaughter fell in love with both subjects. The two majors are really like two sides of the same coin—everything on one side can be applied to things on the flip side. Her interest in geology is put to good use as background information for mining engineering. In the future, studying both will allow her a lot of flexibility as she chooses a career path.

As an added bonus, Slaughter claims that taking an interdisciplinary approach gives her a better understanding of things that may cause disagreements between the fields—a more varied perspective means a better way to bridge two related yet completely different worlds.

So far, she’s managed to put that connection to good use. Slaughter’s undergraduate research project is part of the NASA ASTEROIDS UREP, one of two programs funded by the University’s NASA grant. After about six weeks of summer coursework in general space education, Slaughter submitted an abstract about energy modelling for near-Earth asteroids and was accepted to the program.

“Last semester, I focused on literature review, specifically learning background information on asteroid Bennu. This semester, I focused on actually developing the energy models and getting more information for a possible asteroid mining base. It’s been a lot of fun, but definitely very difficult,” Slaughter says. “I’ve learned a lot about how to conduct research and even more about mining in space.”

Over the winter break, Slaughter found a new way to apply her knowledge through a field course hosted by the South Dakota School of Mines. There, she spent three weeks in the wilds of the Mojave Desert learning about structural geology and history of Death Valley.

Loving Life in the Great Outdoors

“I love being out in the field,” Slaughter says. “I feel like having a lot of hands-on background in say, structural geology and mineralogy helps me out a lot when learning about economic geology or rock stability.”

She claims that that’s the most important thing she’s learned so far: if you don’t have that background information on geology, or space mining, you’re not going to be very successful. The people involved in science research encompass a lot of different backgrounds and majors.

Regardless, the transition to online learning has been a rough one, and not everyone is a fan of the changes. Slaughter would much rather be learning outside instead of just being in the classroom. “A lot of my geology classes were taught completely online. There were no in-person components for those classes and it made learning a lot harder,” Slaughter says. “Now that things are back to normal, it’s a lot better.”

Along with the return of regular classes comes the renewal of in-person events. Slaughter was thrilled to share that is part of the student design team for the 2022 SME MineXchange Expo. “I love public speaking!” she says.

After graduation, Slaughter’s thinking of going straight into work as a mining engineer. Although she’s not sure exactly what part of the industry yet, but she knows she could use a break from school. “I’m open to anything,” Slaughter says. “I love Tucson, I love the area, but I wouldn’t be opposed to going somewhere else either.”