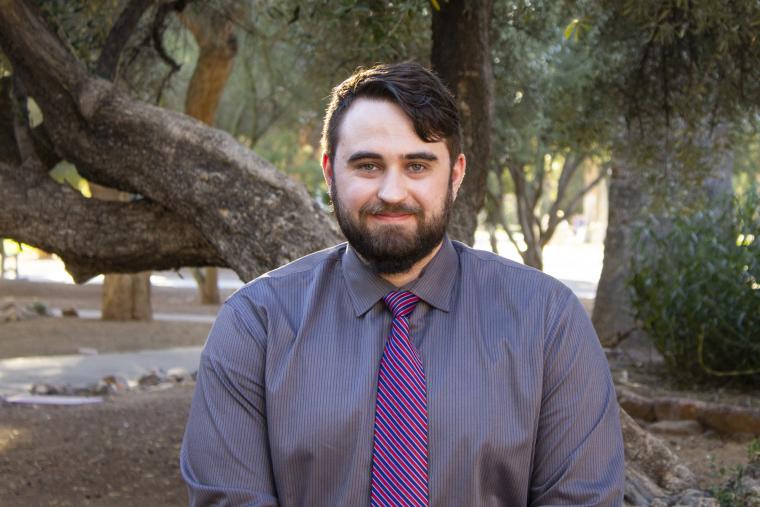 Wildcat Reaches for the Moon

Kerst Kingsbury has been fascinated with space since he first learned about solar eclipses in middle school. He always knew that he would make it to space, some day. Somewhere along the way, mining got involved.

Working in the space industry means something a little different for Kingsbury. While most would think of becoming a mechanical engineer for NASA or studying to be an astronaut, he thought of something outside the box: asteroid mining.

Kingsbury had no prior experience with mining when he began taking his classes at the University of Arizona. In the beginning, it was just a means to an end, but as the years went on mining became more and more appealing to him as its own career. “I knew going into college that I wanted to do something with space development. Asteroid mining was my original thought,” he says. “That's what brought me into the mining realm, but once I started taking more of the classes, I really, really started to fall in love with mining.”

The UArizona was attractive to Kingsbury because it has the best of both worlds. It has one of the best mining programs in the country and as he puts it, “one of the best planetary sciences programs in the world.” He is currently in his fourth of five years as an undergraduate majoring in Mining and Geological Engineering with a minor in Planetary Sciences.

While in the program he has been able to connect with likeminded students and professors, one being Dr. Victor Tenorio, from the Mining and Geological Engineering department. Kingsbury has been a student of Tenorio in multiple classes, and they’ve become close through their shared interest in space. The two have worked together on some ideas and have even presented research on space development at different talks throughout the years. This has allowed Kingsbury to research new ideas and step just a bit outside of his primary area of study.

As with everything, dreams morph and change and while Kingsbury is still interested in space, recently his focus has shifted from asteroids to the moon. “What I am focusing on now, is actually water on the poles of the moon,” he says. There have been some recent discoveries of what seems to be ice trapped in shallow craters of the moon’s poles, and this is Kingsbury’s new fascination. “Ice water on the moon is the most economically feasible first step into space,” he adds. “Developing those resources could honestly enable permanent settlements on the moon.”

Water can be broken down into hydrogen and oxygen, which consequently can be used for rocket fuel. If the moon can act as a sort of galactic fuel station it could revolutionize space travel and exploration. This is exactly what he and Dr. Tenorio have been looking into and now presenting at conferences, for example at the MineXpo SME annual conference in March 2021 under the title of “Lunar In-Situ Resource Beneficiation.”

“I hope he is one of the first wildcats that will set foot on the moon. If not, then he will be managing the miners that go there,” Dr. Tenorio says. “He qualifies as one of the main people that is spearheading this mission and we will require his skills.”

Lunar mining can have incredible environmental consequences, an issue that is also very important to Kingsbury. Mining is essential to life as we know it, but if we could begin extracting resources from asteroids or the moon, we could potentially reduce stressful operations on Earth to the benefit of our environment.  While Kingsbury’s main focus is on space, he also worries about how people are affected by mining on Earth, and how he could potentially help them. His goal is to help not only future generations with space development, but also the people here now, who are feeling the repercussions of years of mineral extraction.

“The reason why I got into engineering, planetary sciences, space development, all of it as a whole is because I want to help people,” Kingsbury says. While in the department he has met people from all over the globe, including India, Angola, Chile and Peru, and he’s become interested in helping them, too.

“We're going to see some beautiful things happen in our lifespan, but we're also going to see some really terrible stuff. Climate change is real and it's going to devastate millions of people across our planet,” Kingsbury says. “I just want to try… like, my efforts aren't going to fix anything, they're not going to fix the worst problems in Africa, but they might be able to help.”

After graduating Kingsbury is thinking about heading to graduate school, but he also wants to take some time to potentially enter the peace corps and help underserved areas in any way he can. According to him, the population of Sub-Saharan Africa will double by 2050 and those people will, “arguably be one of the most hard hit by climate change.”

“I want to go work in Africa because social licensing should happen there the most,” Kingsbury says. “When I was younger, I wanted to be the person that wound up in space and did everything there, but now I really want to try and help people in these areas have their roles in whatever develops in space.”