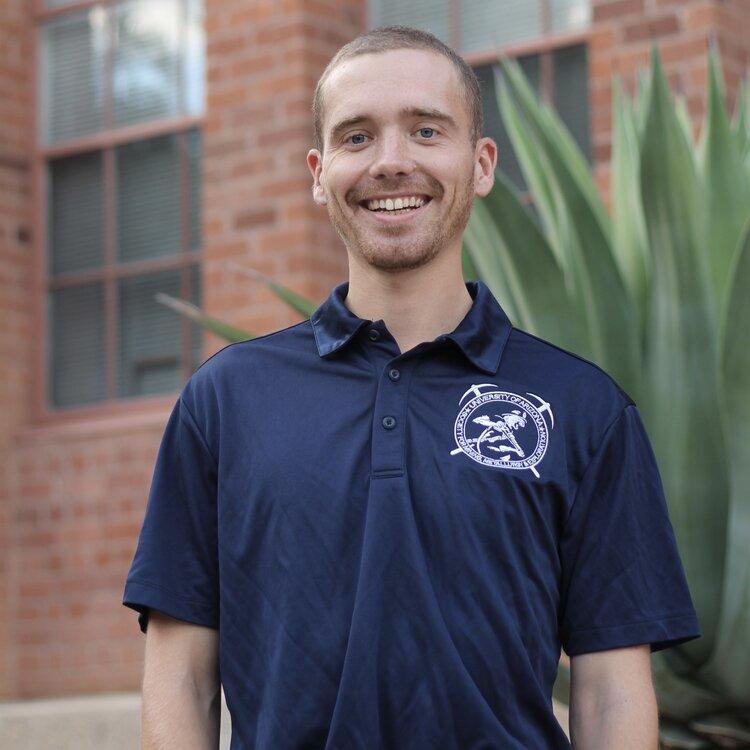 Just as the fields of mining engineering and mineral resources depend on collaboration between a diverse array of stakeholders, so too are the individuals that support them full of interdisciplinary talents and backgrounds.

Max Drexler, master’s student at the University of Arizona, received his graduate degree in geology from Rensselaer Polytechnic in Albany, New York. “It was a really good school,” Drexler says. “I had a good time and learned a lot.” Drexler considered taking the graduate school path immediately after finishing the program but decided to hold off in favor of exploring a career the geology industry. “Fortunately, I had three offers. Two of them were for environmental consulting, which sounds good, but the reality is that most of the geologists babysit contractors who are digging up dirty, contaminated soil in parking lots where factories used to be,” Drexler says. “I thought I would never look at a rock again, and I came to like rocks after studying them for four years.”

The third offer, on the other hand, came from a consulting company in the aggregates industry; he’d be working with crushed stone for pavement and for concrete, quarries and sand and gravel pits. Despite his limited exposure to mining, he was fascinated by the opportunity and upon taking it, realized he enjoyed it tremendously. Drexler’s time there was split between permitting for mining operations and doing extensive field work like surveying quarries with a drone or laser. “Sometimes I would help another office with more hardcore geology stuff. They would go look at the rocks and try to come up with models of how much material is there, which is then related to how much the mine is worth,” Drexler says. “They would tell their client, who was thinking about mining the mine.”

Drexler’s year of experience in consulting opened countless more opportunities to expand his knowledge. He joined the Peace Corps and spent two years serving in Guinea, West Africa, teaching middle school physics and sciences. “I did that for just under two years until COVID brought me back,” Drexler says. In the back of his mind, though, he knew his future would be tied to mining. He wanted to return to school to study it, with a specialization in either economic geology or mining engineering. So, he began applying to grad school.

“Basically, there are only ten or so really serious schools in the States for mining, so it was pretty easy to look at all of them,” Drexler says. In his search, he came across Dr. Isabel Barton, who’s research focus is geometallurgy and process minerology. Intrigued by their similar backgrounds and interests, Drexler contacted her, applied to the master’s program at the University of Arizona, and was accepted. Having been to a polytechnic school, Drexler was thrilled to be attending a school that featured more majors and more types of people—a bigger university—and just like his first foray into mining, metallurgy was a new world for Drexler. “It’s a lot of chemistry, and it’s chemistry in the opposite way that I studied it,” he says. “Before, I studied how ore deposits form, but now I study how to take them apart.” Luckily, Drexler explains, the skills for both are surprisingly translatable, so the adjustment was smooth and easy.

Drexler’s new thesis project involves the extractive metallurgy of vanadium. There are certain minerals, like roscoelite, that contain vanadium and are expected to leach into the system. Ideally, we should be able to extract the vanadium from roscoelite and other vanadium-bearing minerals, but for some reason, the recovery process seems to have a few kinks. A mill processing center, Energy Fuels, that processes ores for a few mines on the Colorado Plateau in southern Utah, is experiencing this issue. “We’re investigating why that is,” Drexler says. “I’m using a few different kinds of microscopes to study the crystal and chemical structure of those minerals as related to their processing.”

Drexler was able to visit the mill recently and tour the facilities. He says that the transition back into an in-person setting has been a welcome relief from the isolation brought on because of the pandemic. “The other students are a big resource. You need to be able to ask people, hey is this class good, what do you think about this professor? Should I register for this class? Without having that, I took some classes that I probably wouldn’t have,” Drexler says. “I definitely missed a lot of field trips last year.”

Although the computer is the modern tool of work and many aspects of research depend on it, Drexler thinks that field work will always have a place in science. There are some things, like the size of a machine and the energy of a mine and the procedure in a lab, that can’t be conveyed via text or flow chart. “There’s all these other things that are omitted from your studies to simplify things. All that stuff is important to go see, too,” Drexler says.

He’s a big proponent for seeing and learning about new things. While Drexler isn’t completely sure what the future has in store for him, he’d like to move overseas and learn another language to add to his collection of French, Portuguese, and English. His plans also include broadening his horizons in the mining industry. “I want to learn more about the business of mining. There are a lot of disciplines. We’re just studying engineering, so we focus more on solving engineering problems,” Drexler says. “There are plenty of other challenges to work on in mining.”