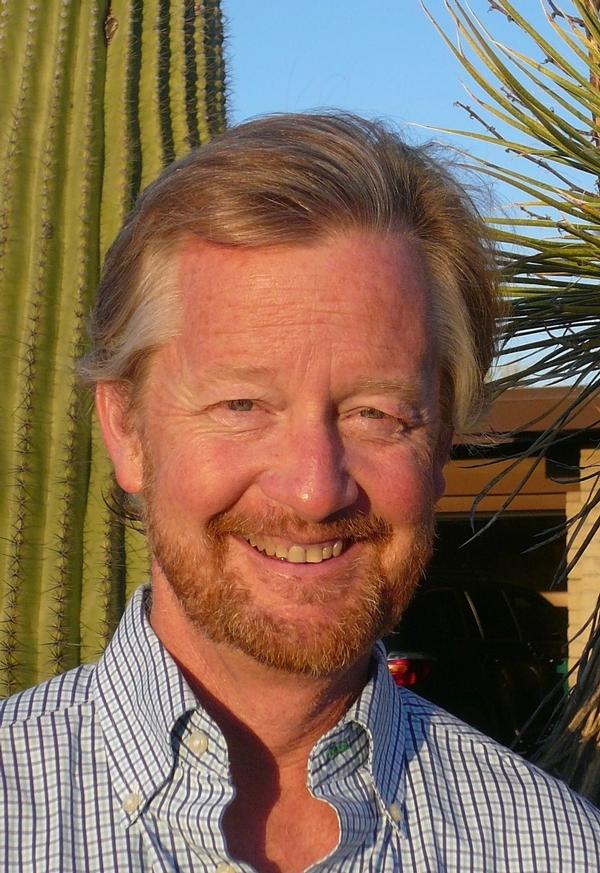 Water Makes the World Go Round

“In our field of hydrology, UArizona has always been recognized as one of the best programs—probably the best program in the world,” says Ty Ferré, Professor of Hydrology and Atmospheric Sciences at The University of Arizona.

Ferré, who sees himself as lucky to find a position was open when he was applying, has been researching and teaching hydrology at the UArizona since 1999. His research interests vary, spanning everything from subsurface hydrology, to field methods, to science communication. Currently, he’s focusing on how data and models can improve water resources decision making in the face of uncertainty and lack of data. “Typically, what we do in applied hydrogeology is a modeler will try to build a model that represents the geologic system. You do that by making sure that it captures the way that the subsurface responds to say, a rainfall event or a drought or something like that,” Ferré says. “You build this model and then you use it for predicting the future response to a new stress.”

With a small amount of data, slightly different models will produce vastly different results, which in turn lead to a huge range of predictions about what’s going to happen in the hydrologic system. According to Ferré, “That’s what we call prediction uncertainty. We try to find ways that you can build multiple hydrologic models, all of which honor your existing data, but that make different future predictions,” Ferré says. “That way you can quantify the uncertainty of your prediction and also give people a better set of predictions that they can use to make decisions.”

Because water is a shared resource, anyone’s additional use or stress on a hydrologic system—on any scale, from a university campus to the entire United States—will have consequences for other users. If those users don’t understand that model predictions are uncertain, then they may not be making well-informed decisions about their water resources. “It’s not to change their mind, it’s to make sure that they have all the information they need to make a good decision,” Ferré says.

Challenges Along the Way

Lack of data isn’t the only obstacle faced by Ferré and his students; lack of funding has been equally, if not more detrimental to their studies. Surveying and modeling water resources is an expensive endeavor, and the payoff is not nearly as attractive as an oil or fracking project, for example. To properly make an assessment, researchers have to look at multiple places in the area to understand how things are changing in space. You can’t just dig one hole and call it done. “The per gallon or per unit cost of water is very small. When people talk about not having water, it’s big volumes of water that we’re talking about lacking. Even on the scale of a mineral deposit, you probably move way more mass in water than you do in ore over the life of that project,” Ferré says. “Yet, the water, we just give it away and there’s no market for it.”

But, things aren’t all doom and gloom. Quite the opposite, in fact, as Ferré is finding that some recent changes in the way we learn about hydrology, specifically the introduction of more online learning components, have been incredibly beneficial to the field. He says that it’s nice to be able to record content, to allow students to go back and listen to a conversation that may have flown by too quickly. Screen sharing features make explaining complex ideas much easier. “The biggest thing is that I’m always looking for an opportunity to go out and talk to stakeholders and try to make that connection between what they really care about and what a model might predict, and how would they think about uncertainty.” Ferré says. “Those one-on-one interactions haven’t happened.”

What about the future?

Making those connections is absolutely vital to both hydrology as a science and for the efficient management of our water resources. The key to unlocking that communication, at least according to Ferré, is engagement. “You would think that people would be really interested in water, but the details of the predictions are frankly not that interesting,” Ferré says.

He and his team have tried a number of angles to increase engagement, including video games, VIP mentor programs, and more. Right now, Ferré is collaborating on three books (one for children, one for a community college level and one as a reference text) to help contribute to better science communication and transparency in the realm of hydrogeology and mining. In the academic sector, encouraging educators in undergraduate and graduate programs to teach students the conceptual, intuitive understanding of the topics instead of the tricky mathematical details has proven helpful for building connections. “I think we’re poised for real revolution in scientific education and communication. Those younger folks who have grown up surrounded by [new technological] things… Those people are going to be the scientists of the future,” Ferré says. “They’ll naturally start to build things that are much more engaging.”

It doesn’t happen everywhere, but Ferré is also hearing more conversations during mine planning meetings that revolve around sustainability. Although there is still a long way to go, the fact that stakeholders are being cognizant of the footprint and the impacts of their mines is a huge step forward. Hydrologists are a hot commodity in the industry, and Ferré thinks they will become even more sought-after as we take those steps towards greener mining projects. “I think that as different users of water become more and more vocal about their needs, we’re going to find that the aspect of the mine balance sheet and decision making are going to become more and more critical,” Ferré says. “I’m happy to be involved with that.”