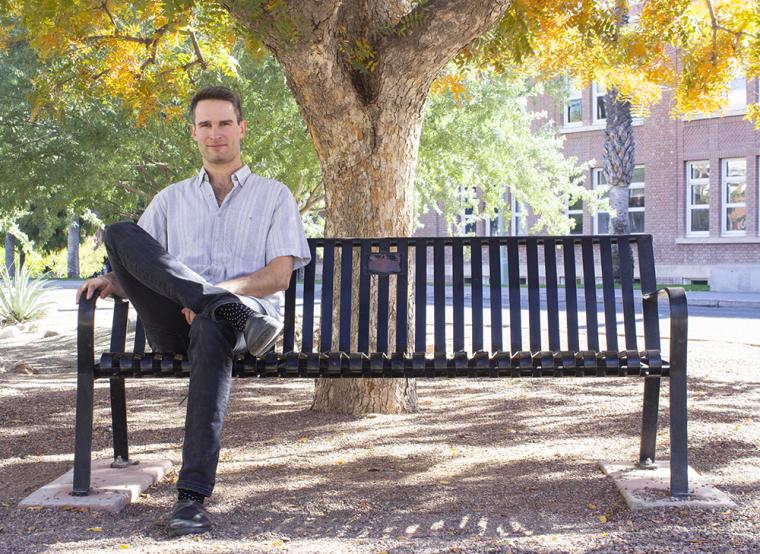 Most go into to a graduate program to get ahead in their field and learn more. Roy Greig wanted the same thing but chose a PhD in economic geology at the UArizona because he wanted a challenge.

Greig’s interest in geology began when he was just a boy. He learned the ins and outs of a geological site with his father Charlie Greig, who is also a geologist. “My dad was always traveling when I was a little kid,” Greig says. “He would go off to exploration projects all over the world and that was always interesting to me.”

The summer after he graduated from High School Greig accompanied his father to Eritrea to deepen his knowledge of geological work. “I was basically his field assistant,” Greig recalls. He helped his father with his geological mapping, doing lower-level tasks and aiding wherever he could just to get some experience. “Most of it involved doing soil sample surveys and the fact that I enjoyed that was very telling,” Greig says. “Turns out the more you learn about these things the more interesting they become!”

While in Eritrea, Greig was also exposed to a very different way of life, and he realized how unique the field of geology is. One doesn’t get to choose a city they like and begin mining for gold, the gold is in a specific place and you have to go to it, it will not come to you. “Mining is a pioneer industry that way, because the resources are really where they are,” Greig says. “It really links it to a place.”

Greig received his Bachelors in Geosciences at the University of British Colombia and from there spent a couple of years working as a geological mapper, working in BC, Alaska, and on the Argentina/Chile border. He knew he had to further his education if he wanted to get ahead in his career, and he knew getting a master’s degree would allow him to do that… but Greig wanted a challenge. “I felt that I needed to do some more schooling. A: for fun. B: to get some credentials and C: to get more knowledge and confidence,” he says. “I knew that it would be sort of a challenge doing a PhD, so I thought I would give it a try.”

Greig’s father had attended the University of Arizona for his graduate education, so the school had always been on his mind. It wasn’t until he was able to visit campus and meet some of the faculty that Greig was sold. “I really liked the people who I met here, the students and faculty,” he recalls. “There was also a great department that in addition to a good Economic Geology Department, had a lot of geosciences and tectonics and other things that are world class.”

Here he has been researching the question of why there are so many copper deposits in the area and why some occurrences are not so big as others, as well as trying to figure out what the origin of the diversity of copper forming systems in this region is. His advisor Mark Barton, co-advisor Eric Seedorff and the Lowell Institute for Mineral Resources have aided Greig throughout his academic journey.

Roy Greig in the field

“Roy is somewhat of a Piper, he moves to the beat of his own drum and although he's very social and outgoing, he is also very comfortable being alone for example out mapping,” Seedorff says.

A fair reading, as Greig himself has stated that fieldwork is his favorite part of the gig. “It's basically going out and saying, ‘okay this mountain looks interesting’ then doing detective work but on the ground looking at rocks,” he says. Working on his own and figuring out the history of the area is where Greig feels at home. Where some prefer the lab, he prefers the outdoor field work. And although it can get dangerous at times, he says that’s just “part of the job.”

“Right now, he's the only PhD student and he's about done,” Seedorff says. The geology department has always been described as a large family, where the older students usually look after the younger ones. “People look up to Roy,” Seedorff adds. “I have a little saying about him which is squintin’ and grinnin’ because he's almost always grinning and has a habit of kind of squinting his eyes.”

His warm and inviting demeanor is a welcomed one in the department, and it seems it’s needed now more than ever. Apart from everything that has been happening this year Barton, Roy’s main supervisor, recently had to take time off due to an accident. Seedorff points to Roy as a rock for the younger students who are struggling with the impact this has had. “If they want to talk to a faculty member, they can talk to me and if they want to talk to a fellow grad student they will likely go to Roy,” he says.

Greig is very close to pulling off this “challenge” and is expected to graduate from his program in May. He says he isn’t quite sure what he will get into next, but says consulting is a very possible option. The short- and medium-term work will allow him to explore different places, rocks and most importantly encounter challenges.